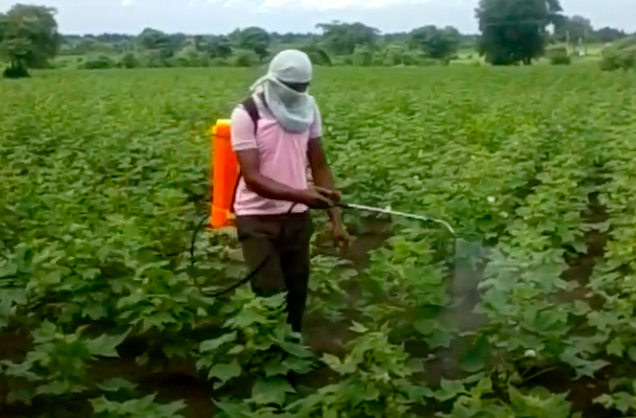 A Swiss Civil Court in Basel handling three civil actions by one Indian farmer and two wives of deceased Indian farmers has ruled that the court has jurisdiction in the case and granted legal aid to all three plaintiffs to pursue their case in Switzerland against agrochemical company Syngenta.

In autumn 2017, hundreds of farmers and farm workers suffered severe poisoning while spraying pesticides on cotton fields in the central Indian district of Yavatmal. 23 of them died. Reports by PAN Indiaand Public Eyedocumented the context and the consequences. While Syngenta still denies any responsibility for the events, official police records from local authorities document that 96 cases of poisoning, two of which led to fatalities, were linked to a Syngenta insecticide going by the name of “Polo”.

In June 2021, the wives of two farmers, who died as a result of pesticides poisoning and a survivor of a severe case of poisoning submitted a civil lawsuit at the civil court of Basel. A specialist law firm in Basel (Schadenanwaelte) represents them in their claim for compensation based on product liability laws. Plaintiffs claim that they or their deceased husbands respectively have used Polo, a product developed and marketed by Syngenta. Its active ingredient (Diafenthiuron) came directly from Switzerland.

A clear signal for the company

The case was filed at the court of first instance after a compulsory mediation procedure at the peace judge in Switzerland had ended without an agreement. The court has now ruled that the applicants will receive legal aid to pursue their claims, since they otherwise lack the financial means to do so. The cases can therefore go forward. The court furthermore ruled to treat the three cases separately and not to join them as different evidentiary questions might arise in each claim.

While there is thus no decision on the merits of the case, it is still noteworthy and of relevance first and foremost to the three plaintiffs but also beyond. It sends the clear message that the Swiss judicial system will deal with cases brought by victims of corporate harm abroad but caused by Swiss companies.

“This is a small but critical consolation for farmers who so far could never dream of knocking on the doors of Swiss judicial system to secure their rights. Definitely, this achievement raises the trust on responsive judicare” said Dr. Narasimha Reddy Donthi, Advisor to MAPPP.

Endeavours by the plaintiffs to secure justice are supported by the Maharashtra Association of Pesticide Poisoned Persons (MAPPP), the Pesticide Action Network India (PAN India) and Asia Pacific (PAN AP), the European Center for Constitutional and Human Rights (ECCHR) and Public Eye. The organizations were involved in carrying out numerous investigations in India and Switzerland, which were necessary to clarify the relevant facts.