Commemorating Bhopal Gas tragedy, No pesticide Use Day is observed all over the world on the 3rd December. The Annual meeting of MAPPP was organised on this day at Subhash Sharma’s Organic farm located in Yavatmal. This meeting, ‘Empowering Farmers to get rid of Pesticide Poisoning’ was organised to increase awareness and impart education, and strengthen the cause of pesticide-poisoned farmers as well as farm workers. Families of pesticide-poisoned persons are in the dire economic situation, poor incomes, and reduced standard of living.

This meeting was organised with the twin objectives of firstly raising awareness among farmers on pesticide poisoning and various aspects related to such poisoning including physical, legal, social and ecological issues and secondly exposing farmers to alternative methods of crop production, including agroecology.

Last year, on 5thDecember, MAPPP was formed to effectively lobby for compensation to families, which witnessed deaths or debilitation due to pesticide poisoning, while spraying on cotton and other crops. Because of pesticide poisoning, families of farmers and farm workers are losing their breadwinners to death and diseases.

Pesticide poisoning has become a major factor in increasing poverty in rural areas of Maharashtra, more particularly in Vidarbha region. The turnover of Indian pesticide industry has reached 35,000 crores at the cost of small and marginal farmers who are becoming poor and indebted. Rural agrarian families where deaths have happened due to pesticide poisoning have stopped sending their children to schools and their standard of living has gone down. He wanted farmers to focus on achieving agroecology. He said agroecological methods of production will free farmers from exploitative agrochemical, trade and seed business companies’.

This gathering has been facilitated primarily by Maharashtra Association of Pesticide Poisoned Persons (MAPPP), in partnership with Shetkari Nyayhakk Andolan, Yavatmal, Pesticide Action Network (PAN) India and other organisations. Organic farmer Subhash Sharma gave a detailed session on ‘basic concepts of agroecology’.  Sahebaro Pawar, and Vijay Rathod among others spoke about the organic practices of farming. They exhorted the farmers to shun agrochemicals and embrace local knowledge on pest management without harming life and ecosystem. 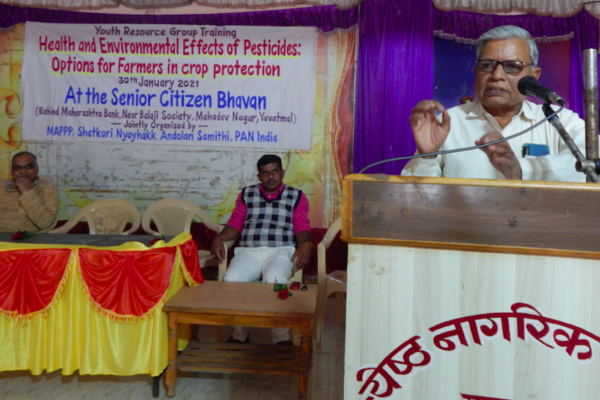 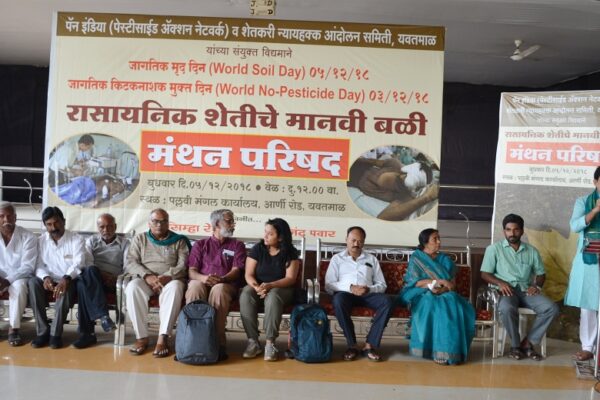